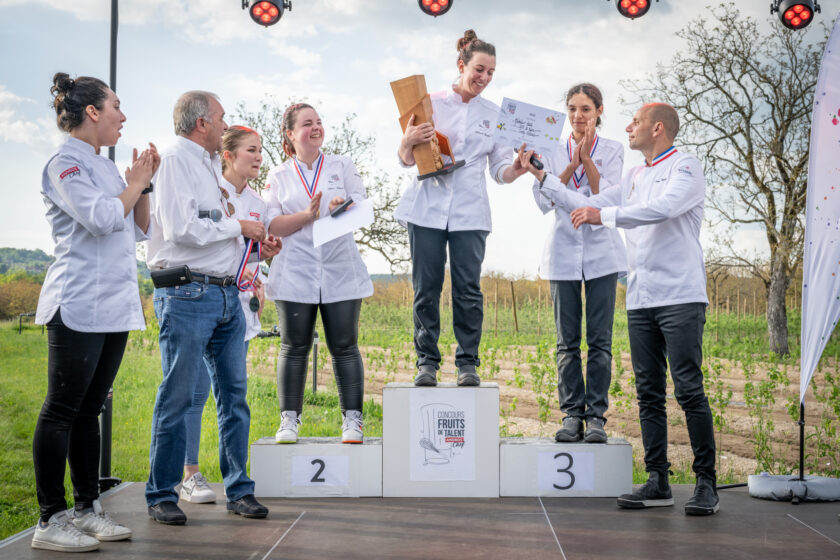 Andros Chef organised the 2nd edition of the Andros Chef FRUITS de TALENT competition finale for students and apprentices in pastry, which took place on Saturday, May 7th in Biars sur Cère in the Lot, at the heart of the experimental Andros orchard.

It’s the only pastry competition with fruit as a central theme whose mission is to support schools and coaches in their process of transmission as well as the talent of tomorrow.

Andros is committed to promoting learning around fruit, its cultivation and its use in pastry, and also its essential fruit flavour, as the candidates follow the same rules of naturality that Andros imposes in its own fruit ingredient recipes.

This year, the candidates had to prepare 4 recipes on the theme of “citrus” without using any colourants, additives, gold leaf, sparkles, and no added aromas of any kind. 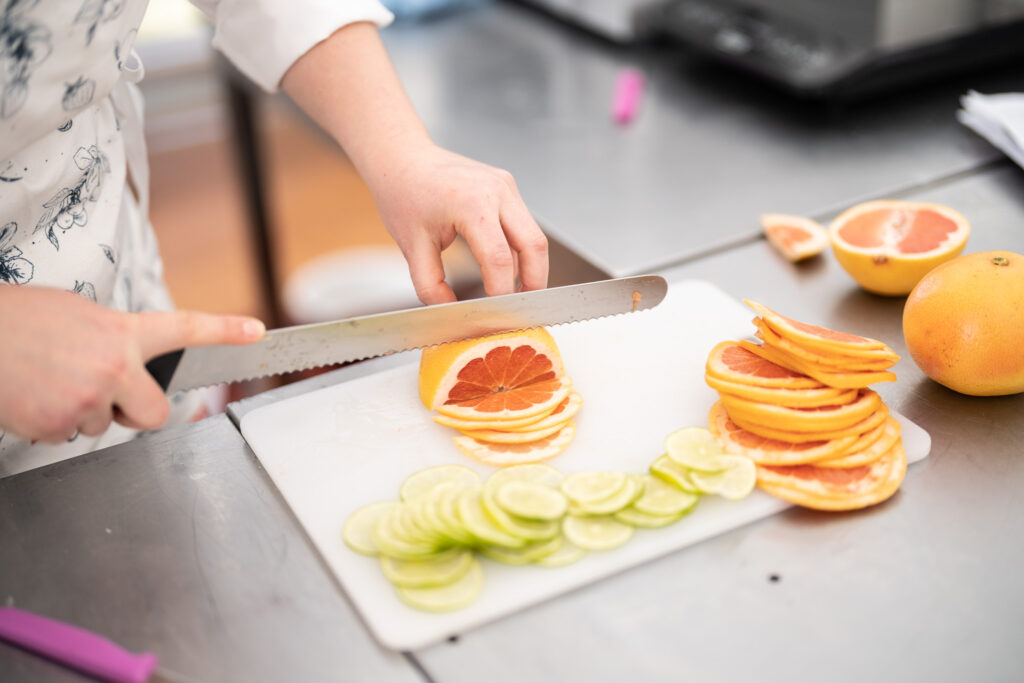 Based on their applications by a jury of professionals, 8 finalists were selected:

After 7 hours of preparation, these 8 finalists presented 4 creations on a buffet:

Before a very prestigious jury: 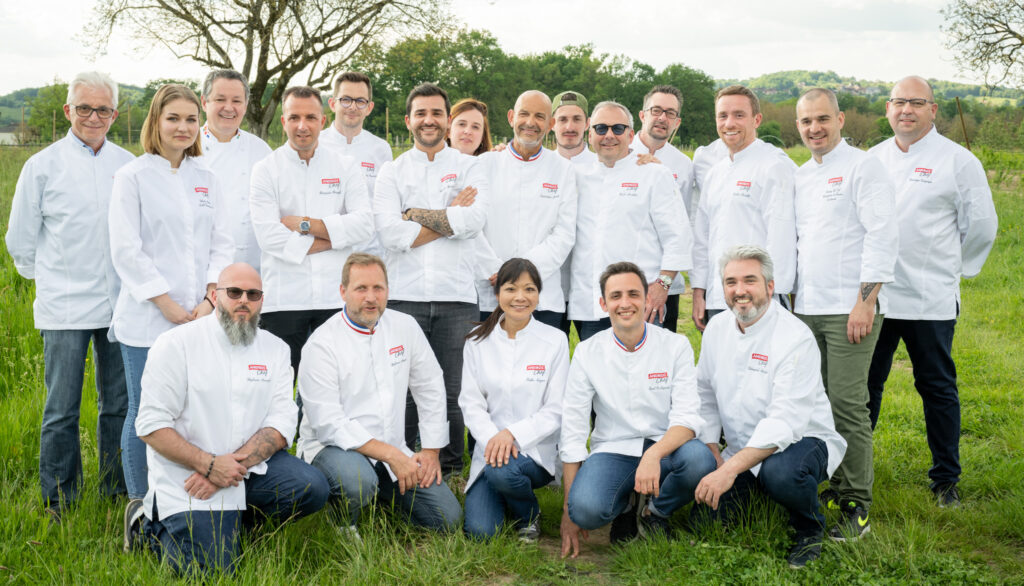 Davy Tissot, Meilleur Ouvrier de France and 2021 Bocuse d’Or winner presided over this edition.
Paul Occhipinti, Meilleur Ouvrier de France chocolate and candy maker was the sponsor.
Stéphane Augé, Meilleur Ouvrier de France ice cream maker and was the trainer and coach of the French team in the 2020 Gelato World Cup.
Jean-Charles Balthazard, Master of pastry, candy, chocolate, ice cream, coach and also president of  the ANFP (Association Nationale des Formateurs en Pâtisserie).
Sophie de Bernardi, Pastry chef for 4 years at Café de la Paix in Paris and now openning her own pastry shop. Member of the international organising committee for the World Pastry Cup.
Stéphane Bonnat, Master chocolatier and runs the famous and family-owned Maison Bonnat.
Vincent Boué, Meilleur Ouvrier de France ice cream maker and president of the national association of ice carvers.
Rémi Bouiller, Pastry chef and founder of the Kreme tea shop in Montrouge.
Sébastien Cantrelle, Pastry chef, consultant and coach.
Jéremy Del Val, Pastry creation chef at Dalloyau and France champion of desserts.
Julien Dugourd, Pastry chef of La Chèvre d’Or (**) in Èze. This exceptional chef created the “Vanilla Diorama” for the house of Dior.
François Frauziol, R&D pastry chef at Andros.
Oscar Garcia , Chef who, back in 2014 and 2015, at 25 became the youngest Michelin-starred chef.
Solveig Hoyaux is the big winner of last year’s Fruit de Talent competition and the MAF 2022.
Carl Marletti, Pastry chef. After a long stint at the Café de la Paix, he opened his store in the 5th arrondissement of Paris in 2007 and was recognized as the best pastry chef of the year in 2009.
Stéphane Mangin, Pastry chef at the triple-starred restaurant Georges Blanc (***).
Nasserdine Mendi, Meilleur Ouvrier de France in pastry, he has been vice-president of the Pastry/Confectionery World Cup in 2007 et having taught in renowned institutions around the world.
Edouard Morand, Chocolatier, confectioner and pastry chef. He was a MOF finalist in chocolate and candy in 2015.
Keiko Nagae, Pastry chef. She was in charge of pastry for Michel Troisgros at the Lancaster Hotel and became pastry chef for Pierre Gagnaire, working for all his restaurants around the world.
Nicolas Paciello, Pastry chef and founder of the CinqSens Paris pastry shop.
Laurent Ratia, apricot producer in the Narbonne region. Andros Chef is committed to highlight their partner producers.
Gianni Spadafora, Executive pastry chef at  Philippe Conticini in Paris.
Dominique Campergue, Cooking coach and Raphael Dussuelle, Pastry coach at the CFA Cahors which greatly supported the development and success of the competition.

Mélanie Hours took the first prize in the competition, awarded by Davy Tissot, Frédéric Gervoson (CEO of Andros Group), and Solveig Hoyaux (winner of the first edition in 2021 and 2022 MAF in pastry). She is a SEPR Lyon student and was coached by her trainer Sandy Violand.

She also won an internship at the école nationale supérieure of pastry (ENSP) Yssingeaux, a masterclass for her school and a gift certificate for professional equipment.

Bérénice Vanvincq from l’IRFMA Nîmes won 3rd place and also a gift certificate and was accompanied by Jordan Joro, a pastry chef in Miers.

In the end, three special prizes were awarded.

The honorary mention prize was awarded to Kelly Barraud  from CFA de Cahors and her coach Sylvain Martel.

The Andros Coup de cœur prize went to Coline Liard of the MFR in Balan, the youngest contestant, who was assisted by Eric Bernollin, MFR coach.

And the special dessert prize went to Lucie Monetti of the CFA Laxou, with her apprenticeship supervisor Sylvain Musquar.

The president of the Association nationale des formateurs en pâtisserie Jean-Charles Balthazard awarded the ANFP trophy to Sandy Violand. The young coach has now seen two of her trainees win the “Andros Chef Fruits de Talent” competition, in 2021 and 2022.

A big THANK YOU to all the participants and an immense BRAVO to the winners!

This benevolent day was an opportunity to discover or rediscover all the ranges of Andros Chef 100% natural fruit ingredients: confits of citrus zest, sweetened fruit purées, 100% and organic…high fruit compotes with pieces, clean label fillings (with only 4 ingredients: fruit, sugar, pectin and lemon juice), or semi-candied fruit. All these ranges benefit from Andros Chef’s expertise, quality and its Amont Fruiter.

Andros Chef offers tasting kits and also, for those who wish, training modules for schools. All pastry professionals can also benefit from samples to discover the product ranges simply by requesting them from Andros Chef. 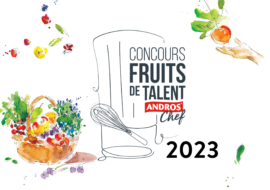 Fresh from the garden! 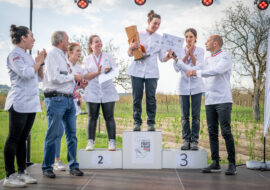 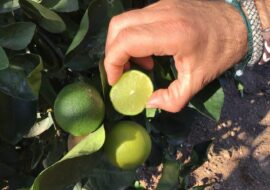 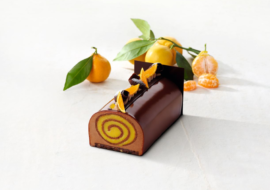 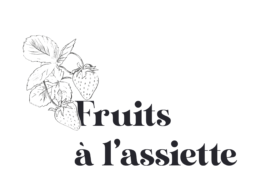 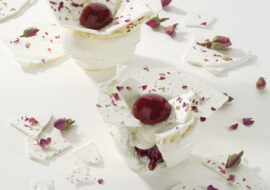 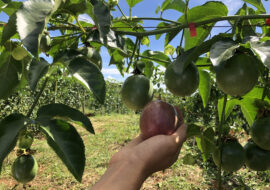 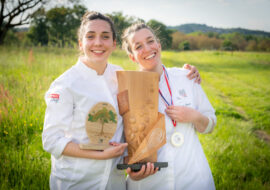 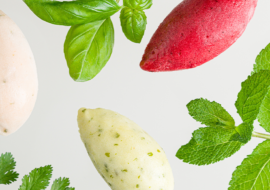 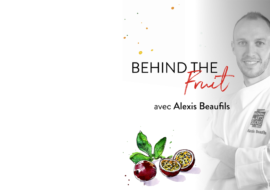